On Friday 1st February, the whole school was involved with the NSPCC Number Day

The Early Years classes participated in a number of activities including colouring by numbers and a number hunt.

Years 1 to 6 took part in the ‘Magnificent Maths pert club Quiz’. In the Infants, the children were in 6 teams and had to come up with their team names. (‘Jelly Welly’ was the favourite team name!) There were 5 differentiated rounds totaling 35 points.   All of the children worked well as a team and were good sports when the ‘Cheese Bacon’ team won with a whopping 34 points! Well done Caitlin, Tyler, Amrik, Alfie, Naila and Veer!

In the Juniors, the children were divided into mixed groups of ages and abilities and answered questions in four rounds: a terrific times tables round, a sensational sports round, a musical Maths round and a problem solving picture round!  As well as challenging their minds, the children enjoyed some “club” snacks of biscuits and crisps!

Hosted by the quiz master, Mrs Platford, the children showed huge amounts of enthusiasm, brilliant maths knowledge in different contexts and fantastic team work!  The team work was especially strong with older children supporting younger children and plenty of turn taking in solving the problems.  This made the staff feel very proud of our wonderful children. Winners of the Junior quiz will be announced on Monday! 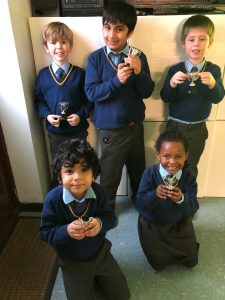 Data Protection Statement and Privacy Notices Bryony School , Nursery and Pre-School (together “the School”) take data protection and our obligations with regard to data protection seriously. The School is a Data Controller for the purposes of the current Data Protection Act and the General Data Protection Regulation and the UK Data Protection Bill coming into force in May 2018 (together “Data Protection Law”) and is registered with Information Commissioner's Office (“ICO”). Our registration number is Z3620015.This section of the school website provides information on how the School uses (“processes”) personal data about individuals (together “data subjects”). The School’s Data Protection Officer and is available to contact on any Data Protection issue by emailing: [email protected] This section of the website is intended to be read in conjunction with the School’s Data Protection Policy, the School’s Terms and Conditions and other relevant School policies. Personal Data Personal data is data relating to a living individual who can be identified from that information or from that data and other information in the School’s possession (for example: name, address, telephone number, staff number). It can also include expressions of opinions about an individual. Sensitive or special category personal data relates to racial or ethnic origin, political opinions, religious beliefs, trade union membership, health, sex life, criminal convictions. Personal data concerning disability is sensitive data. In order to carry out its ordinary duties to staff, pupils and parents, the school needs to process a wide range of personal data about individuals (including current, past and prospective staff, pupils or parents) as part of its daily operations. Dependent on the nature of the School’s relationship with the data subject, there will be different reasons and purposes for the school processing your personal data, the types of data held, how the data is collected, the legal basis for processing the data, who has access to the data, who the data is shared with, the retention period for that data, and the specific subject rights with regard to that data. Privacy Notices For ease of reference and understanding, the School has produced different Privacy Notices for the different categories of individuals it deals with. These can be accessed using the drop down list below. Your Rights and Contact Details All data subjects have certain rights under Data Protection Law, including a right to be given access to data held about them by a data controller. Other rights will be dependent on the nature of the information given and are more fully explained in the privacy notices below. If you have any concerns about the School’s handling of your personal data, please contact the School’s Data Protection Officer ([email protected]). You can also find details of your rights under Data Protection Law at: www.ico.gov.uk.